You’ll need an entire day to enjoy everything on offer in Uzgen, an ancient town on the banks of the Kara Daria River in Osh’s beautiful Fergana Valley. A number of references in Greek and Chinese texts date the city to the 4th Century BC. Some historians believe that the mythical town of Antiohia built by successors of Alexander the Great referred to as the Town U or Uchen was the beginning of today’s Uzgen. The remaining ruins and artifacts visible today are most associated with the city’s Silk Road history. During the 12th century, Uzgen was the capital of the eastern Karakhanid Khanate, a Turkish dynasty that ruled Transoxiana, an area that encompasses much of Central Asia (modern-day Uzbekistan, Tajikistan, southern Kyrgyzstan, and southwest Kazakhstan) from the 10th to 13th centuries.

Craftsmen, builders, scientists, writers, and poets called home the streets of this once densely packed city. Some even say that the city’s buildings were so tightly packed that you could walk the city along its rooftops. At the peak of the Great Silk Road, the city offered more than 20 bathhouses and mosques for passing merchants and locals alike — those that remain are amazing structures with much detail left intact.

The ancient town consisted of three shahristans (sections), and the current museum complex is located on the third shahristan — it’s there that you’ll find segments of ceramic pipes used as the city’s thoroughly modern (for the times) water and sewage systems. Beautiful silver and gold coins have been recovered from the site, as well as glass and ceramics produced during the Silk Road era.

The museums, ruins, and bathhouse that remain from ancient Uzgen are a natural stop for any day tripper, but the city also offers a bustling market and a still-active ancient rice mill producing Uzgen red rice, which is famous across the region and throughout Kyrgyzstan.

What to See and Do in Uzgen 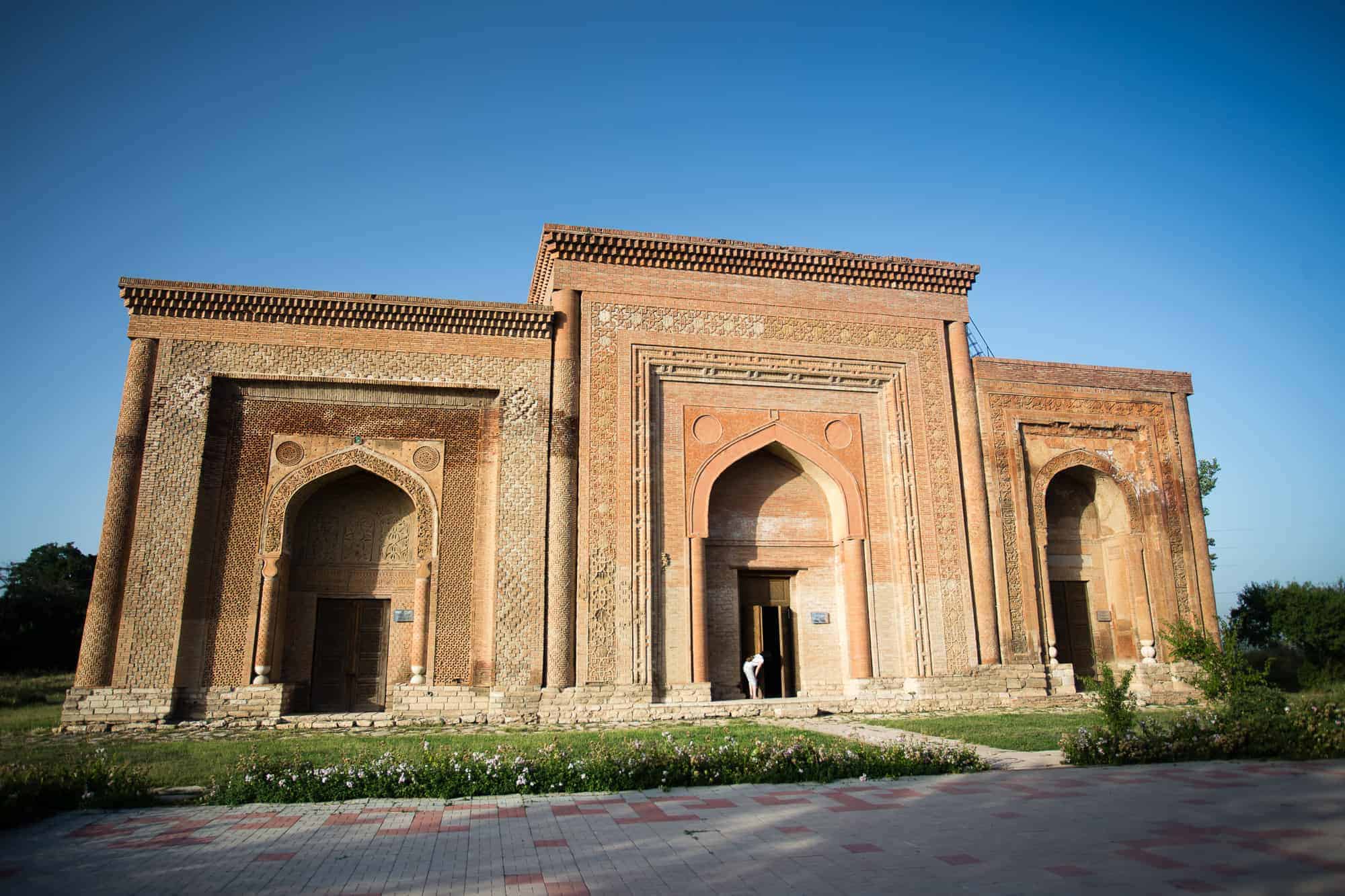 The museum, minaret, and mausoleum complex all remain in a good shape. The three-mausoleum complex is representative of 11th and 12th century Karakhanid Dynasty buildings and architecture, and housed members of the Karakhanid Dynasty. The minaret was damaged in an earthquake in the early 20th century, but was rebuilt in 1923 to its current height. It's possible to climb to the top of the minaret as an overlook for the town of Uzgen. On clear days there are views to the snow-covered Pamir Mountains in the distance. The on-site museum has some signage in English and is worth a visit. There is also an English-speaking guide available, but prior booking is advised.

Pilgrims seeking the 17th century mazar of Al-Sarakhsi Shams al-A'imma will find his mausoleum in the western part of the town, in Uch Tepa Mahalla

Bathhouse culture remains a tradition across Central Asia. The bathhouse in Uzgen offers an impressive, historical look at a beautifully designed structure that you can wander through and still use to this day. Bricks found in its wall date to the 11th and 12th centuries, and you can still admire the unique archways and corridors leading between the steam and washing rooms

Behind Lenin Street not far from the Archaeological Complex

The many historical rice mills in Uzgen outline the city’s importance as one of the key producers of Uzgen rice — a variety of red rice valued and beloved by the Uzbek and Kyrgyz people. Uzgen red rice is the specific variety that locals use in plov. The unique composition of the soil in Uzgen add a flavor to the rice kernel (and dish) that is unlike any other. Of the many mills in town, the Orom Street Mill remains one of the few active mill using the ancient wooden technology. It's worth a visit!

Usually operates during the day, but it's best to visit as part of a day tour of Uzgen to ensure that it is operating

How to get to Uzgen from Osh

Located about 60km northeast of Osh,  Uzgen can be explored independently or by booking the Osh Travel day tour, which adds even more historical context to this fascinating site with the help of a guide. There is also the option to include in this tour a visit to a traditional rice mill and delicious home-cooked lunch of Uzgen plov in a family home.

The Uzgen city center is small. All the sites mentioned are easily explored on foot. That said, the animal market on Mondays is a bit outside of town and might require additional transportation.

To get to Uzgen from Osh city center, take a shared taxi from the entrance to Kelechek Bazaar (on Masaliev Street). Shared taxis cost 100 som per person each way. You can also hop on a marshrutka  from Noviy Avtovokzal in Osh. They leave approximately every 40 minutes between 08:00 and 19:00 (50 KGS/person).